Store, access, and edit 256GB of data at speeds up to 1350 MB/s with the Fusion PCIe SSD Flash Drive from Sonnet. The palm-sized storage device was designed around a Gen 3 M.2 PCIe SSD module, which operates fast enough to support RAW 4K video editing. This maximizes the bandwidth of the drive- s 20 Gb/s Thunderbolt 2 interface. The silent, fanless design is made possible by the aluminum enclosure, which cools the SSD. This in turn retains the power efficiency of the device, which is exclusively bus-powered and requires no external adapters.

Data Transfer Speeds up to 1350MB/s 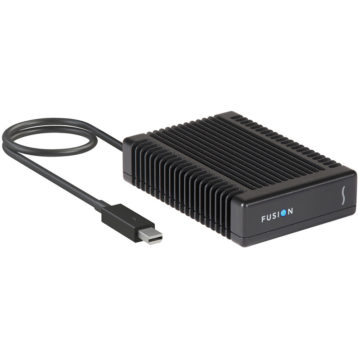