Call or e-mail us for availability

Key Features
Designed for film sets, photo shoots, and music studios, the 8TB Rugged RAID Shuttle USB 3.0 Type-C External Hard Drive from LaCie lets you capture and transport data in the field, thanks to rain, dust, and crush resistance, as well as a drop resistance up to 4′. To better accommodate working in the field, the Rugged RAID Shuttle is both wide and flat to fit into bags and envelopes, and also features hardware encryption with password protection. With hardware encryption, no additional encryption software is needed to keep your data confidential.

LaCie’s 8TB Rugged RAID Shuttle features a storage capacity of 8TB that is split over two 4TB hard drives, which support hardware RAID 0 and RAID 1. RAID 0 will stripe both drives together to deliver fast read and write speeds, while RAID 1 will mirror the contents of one drive to the other to create a 1:1 backup copy of your data. While RAID 0 delivers better performance, there is no data redundancy, so if your drive fails, everything will be lost. If you’re thinking about using RAID 1 for its data redundancy, this comes at the cost of drive performance. RAID 1 will also reduce the capacity of your drive by half since it uses one of the drives for redundancy. So, under RAID 1, you’ll only have 4TB of usable space.

Compatible with Windows 7 and later or macOS 10.10 and later, the Rugged RAID Shuttle has a 5 Gb/s USB 3.0 Type-C interface, which is also known as USB 3.1 Gen 1 and delivers speeds of up to 250 MB/s. The USB Type-C interface may also be used with Thunderbolt 3 hosts and other USB generations, such as USB 2.0, and power is provided using bus power from the corresponding interface. Included is a USB 3.0 Type-C to Type-C cable, as well as a USB Type-C to Type-A cable. Protection is provided by a limited 3-year Rescue Data Recovery Services plan and also included is a 1-month membership to the Adobe Creative Cloud All Apps plan. 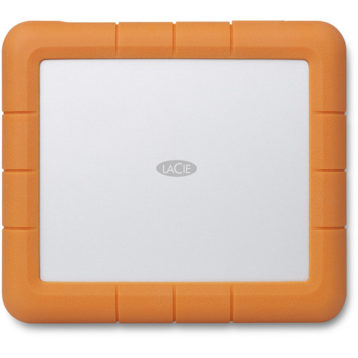